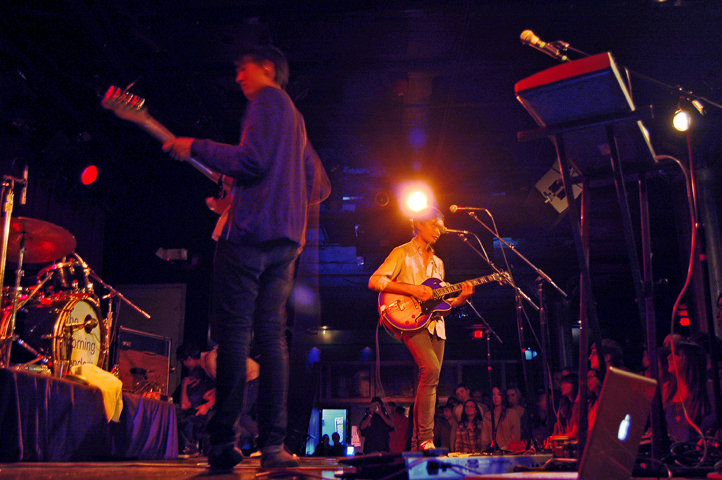 Last night, the Paradise crowd was absolutely stunned out of their Warby’s and flannels, the beards literally flying off their faces thanks to an absolutely epic gig from the Morning Benders, who were in Boston at just another stop on their lengthy touring roster in 2010. The band, which made a stop right next to humble blogger’s childhood home for a hotpot off the special Asian Breeze menu for special people, certainly created their own melting hot pot of delicious music last night, absolutely wowing the ladies Pulp and Circumstance. Humble blogger sister Nicki-ChaCha Wolf snapped photos all night (see a set of her shots from the gig here) whilst Mackenzie and humble blogger review. Er, theirs…below…

On a night when all the leaves were brown and the sky was gray with rain spit, the Morning Benders brought a hazy dose of California dreamin’ to the Paradise.

Meandering between the danceable and the atmospheric, the boys (each more adorable than the last) played favorites off 2008’s Talking Through Tin Cans and their latest album, 2010’s Big Echo.

The Morning Benders have seen quite a run in the past year; they released their second LP in March and clearly have yet to make any stops on a lengthy tour in support. Playing a smattering of tunes from both records, the band were “going deep” on tracks like “Mason Jar”, “Stitches”, “Hand Me Downs”, “Pleasure Sighs”, and “All Day Day Light.”

The sea of gig-goers turned from mesmerized and smitten (you girls in the front row whipping about your hair and repeatedly pushing your glasses up the bridge of the nose, we’re looking at you cuties) to downright kicking up the heels dancing, and we were on our way.

And the Benders certainly aimed to please, declaring our little Boston gig one of the best yet on tour (our favorite warm and fuzzy line here at P&C) and even pacified the crowd’s constant shouts of “Take off your clothes!” and “Lovefool!” with a cover for the ages: Fleetwood Mac’s “Dreams”, naturally. Smart boys, that tune was made for this band–of which you can see them do live, here–as Or thickened out that classic McVie bassline and made it enough of his own without tarnishing what makes “Dreams” so brilliant.

The Benders closed with a sing-along rendition of “Excuses” that devolved into a fuzzy mass of looped vocals and echoing feedback, and then they trotted back for an encore of gorgeous new tune “Virgins” (much to humble blogger’s delight).

File under: Thunder only happens when it’s raining, drainpipes only happen when you’re awesome.