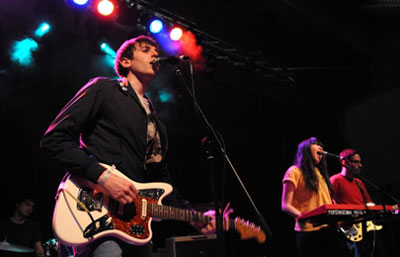 Last night, P&C’s humble blogger and dedicated podcast voice Thom Lau headed out to find purity within heart; amidst a backdrop of bearded, flanneled wonders, and an offer of tequila, the band sashayed with gusto through their deliciously sweet pop tunes, and a few new ones, to boot. Thom Lau reviews…

Listening to the Pains of Being Pure at Heart’s self titled LP is like getting a hug from someone wearing nothing but one of those oversized novelty jumpers (that’s a wooly sweater for you Yanks). Warm, fuzzy, sweet and more than a little bit cheeky.

That was 2009 and PoBPaH are hoping to ride a new wave of sunshine pop with recent single “Say No to Love” and an upcoming album. The band have just started a marathon cross country and international tour and I got to sample their latest delights at their opening show in The Paradise last night.

With PoBPaH’s brand of twee jams seemingly so difficult to dislike, I really expected a larger crowd. Nevertheless, the band took the stage with an exuberance and gusto not seen on their records. This band will never need mosh pits but they sure can bounce, thrash and swing through a set of pop gems that included album standouts “Young Adult Friction”, “Come Saturday” and “This Love is Fucking Right”. Lead singer Kip Berman, possesses a Michael Cera-ian (it’s now a word!) combination of nerdish charm and guitar rock mad skills that makes him as likable as their well crafted tunes.

Most encouraging was the sampling of new tracks on display. Berman didn’t reveal their names but combined with new single “Say No to Love” they gave me a real optimism that the new album could be a steady progression onward from their self titled debut.

It was a chilly autumn night and PoBPaH certainly warmed the crowd with their brilliant blend of sweet sunshine fuzz, it was if all the cold didn’t bother and you could hold an ice cream in one hand. But be sure to raise a fist with the other as this band is going rock your 2011.