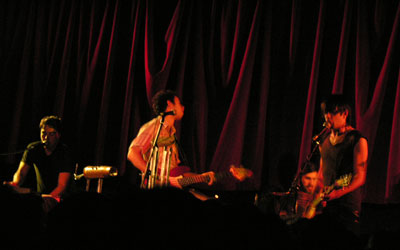 “Call it a ritual if you will”, but anytime humble blogger gets out to see a gig, its important she let the entire event marinate, for a few solid hours, if you will.

And last night after Montreal’s Wolf Parade pummeled through the House of Blues, it was no different. Playing a trove of tunes off their three LPs, Spencer Krug and company shattered all notions of speed, hyperactivity, and welp, sweeping live gigs.

Starting out the set with new tunes and quickly satiating the crowd’s appetite, the band went into old favorites like “Dear Sons and Daughters of Hungry Ghosts” and “I’ll Believe in Anything” (both off 2005’s Apologies to the Queen Mary) with blazing speed; most of the crowd was hyper energized by the fast paced (ok, speed) drumming and frenetic guitar a la Dan Boeckner.

It’s one of humble blogger’s favorite things to see tunes–particularly those made most popular in the band’s catalog–really reworked in a live setting. It’s as if you know you haven’t been spared; you haven’t been swindled; and you certainly haven’t been duped by someone flipping a switch in the back to “cue the music track”, or something.

And while those old favorites really rallied the crowd and reminded them of why they adore this band in the first place, it was the new tunes that really peaked P&C’s attention; on the road in support of their third studio record, Expo 86, the band included “What Did my Lover Say? (It always Had To Go This Way)”, “Palm Road”, and “Oh You, Old Thing”.

One thing is for sure; the band is much tighter live than they ever have been, particularly five years on from their breakout record. While time has been spent on other projects, Krug and Boeckner seemed to easily pick up in areas where they once left off, leaving very few signs of any separation. During a live gig, their downright manic styles work in unison, no the matter whether its Dan or Spencer taking lead.

It’s a match in songwriting and live performing heaven, really, even if the two appear on stage as polar opposites–Krug, looking particularly preppy in a button-up, patient but dispensing these furious but deliberate vocals, and Boeckner a mere skeleton of a man, tatted up and appearing anxious, as if he’s seriously itching for a smoke.

Cutting some of that furious mania with a knife was a break before encore; three tunes, featuring classic “You Are a Runner and I Am My Father’s Son”. Let me tell you; we certainly didn’t want to run out of there as fast we could, fleeing the mess. It was a mess humble blogger never wants to pick up.